Brexit: How are the UK’s talks with the EU going? – Quantic Global
7071
post-template-default,single,single-post,postid-7071,single-format-standard,eltd-core-1.3,quantic child-child-ver-1.0.1,quantic-ver-1.7,,eltd-smooth-page-transitions,eltd-mimic-ajax,eltd-grid-1200,eltd-blog-installed,eltd-main-style1,eltd-enable-fullscreen-menu-opener,eltd-fade-push-text-right,eltd-header-standard,eltd-sticky-header-on-scroll-down-up,eltd-default-mobile-header,eltd-sticky-up-mobile-header,eltd-menu-item-first-level-bg-color,eltd-dropdown-default,eltd-light-header,eltd-header-style-on-scroll,wpb-js-composer js-comp-ver-5.7,vc_responsive

Quantic Global / Politics  / Brexit: How are the UK’s talks with the EU going? 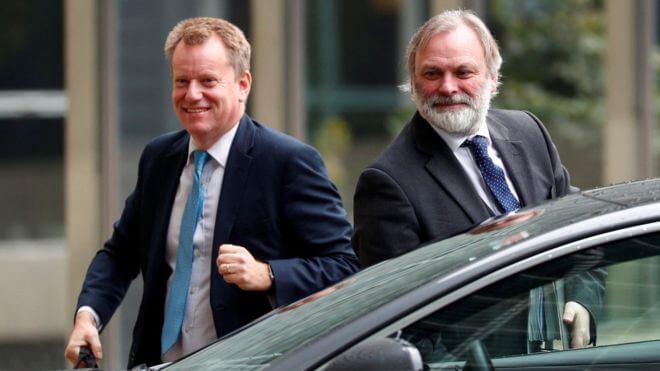 Brexit: How are the UK’s talks with the EU going?

EU officials say the UK is “dancing around the issues” in talks in Brussels on a Brexit deal.

Boris Johnson’s government is seeking to renegotiate the withdrawal deal agreed by his predecessor, Theresa May, but discussions so far have been at a very general level.

The EU maintains the text of the withdrawal agreement is closed but it is still listening.

“The UK wants a less involved relationship,” says one EU source close to the talks, “but it’s not clear what that means in practice.”

The prime minister’s Brexit envoy, David Frost, is back in Brussels this week for further talks but time is running short.

UK officials say criticism of their approach, from the EU side, is unfair.

“We’re having conversations this week which pick up on last week’s discussions,” one official says, “and we’ve agreed where to focus talks in the future.”

BBC News – No-deal Brexit: What is the UK government doing to prepare?

Next post
BBC News – Brexit: Will Britons in the EU have to pay for NHS treatment?

BBC News – No-deal Brexit: What is the UK government doing to prepare?

The government says it...

Ajay is a qualified professional with over 15 years of experience working in different fields of Hospitality, Aviation, Healthcare and Recruitment Industry. He has been taken on board to enhance the business with his experience in these various fields. He has managed and trained a lot of successful projects and resource’s over a period of time. Ajay is a very versatile and pragmatic personality with good communication and inter personal skills which has always made him a sought after team player. He is a task master who believes in making things happen, he has been given the responsibility to head the operations across all geographies. He has got an extensive travel history for work across the globe which gave him the exposure to the international market. Ajay has been taken on board the business to launch, new International Division to attract businesses across geographies like UK, US, Middle East, Europe, Australia. As a new function in the business his role encompasses strategically developing internal infrastructure, training, new processes, marketing, and overall management and budget control of the international recruitment across the company. Launching and opening local recruitment offices in UAE and UK has provided market penetration and brand growth in an ever increasing competitive market. Coupled with new UK based international teams has allowed Quantic Solutions Pvt. Ltd. to be successful in its first year of Outsourcing Process.

Abhishek Tripathi is a pioneer in Recruitment Process Outsourcing in India. Having worked across various fields over 22+ years, he has consistently demonstrated an ability to understand and add value to a wide variety of business interests. His diversified knowledge base in segments including IT development, Sales & Marketing, Recruitment and Outsourcing make him a well-rounded professional with an array of skills. Skills that have been tested in both local and international markets with him working across countries during his career. Abhishek specializes in general management, service development and deployment, corporate development, business operations, employee engagement, strategy and governance. He is well known in the industry for his humble and employee friendly approach which has earned him a great deal of respect and trust across the spectrum.